I’ve never been shy to say that Morocco has been a source of inspiration for me. After visiting, these top inspiring moments in Morocco are ones that I constantly reflect on. I remember when I stepped off the plane — I had no idea what to expect. The excitement, the thrill, and the memories to come from that two week trip has stayed with me ever since. 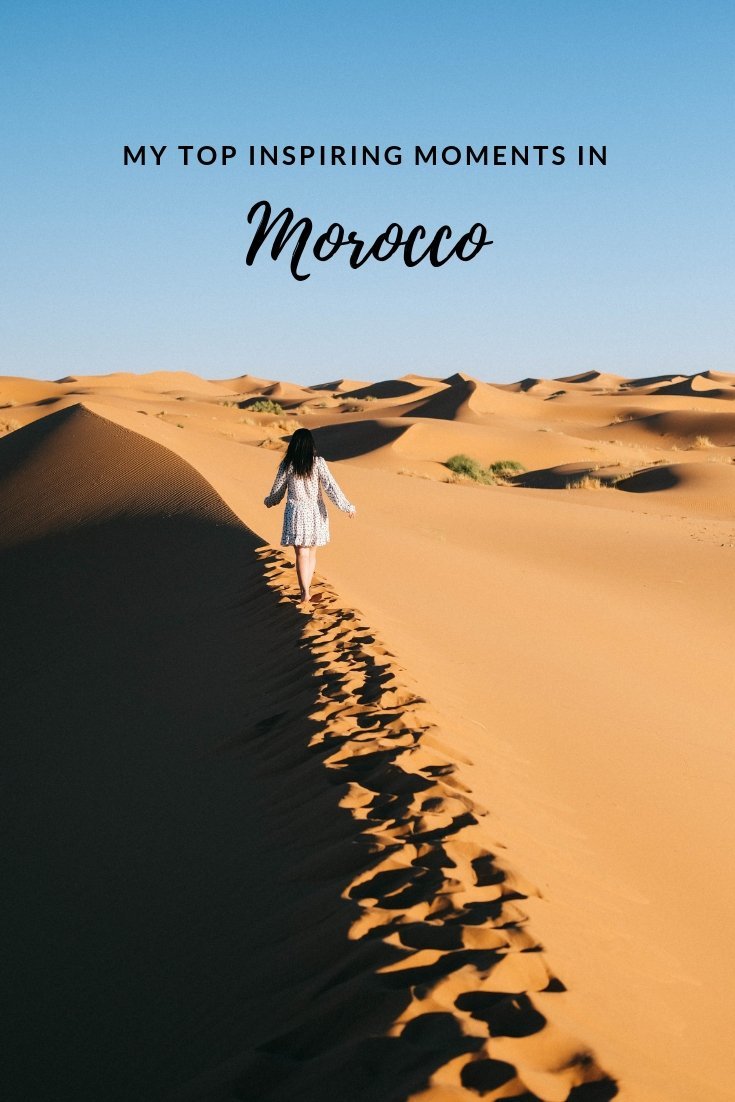 Morocco was a country that took me by surprise. If you read my 10 things I didn’t expect about Morocco post, you’ll know just how much I fell in love with the cuisine and especially the beautiful spaces. When traveling, my inner design-lover and adventure seeker crashes together in usually a journey that looked a little like this.

Take a look at my top inspiring moments in Morocco that have been beckoning me to return, hopefully soon.

My Top Inspiring Moments in Morocco 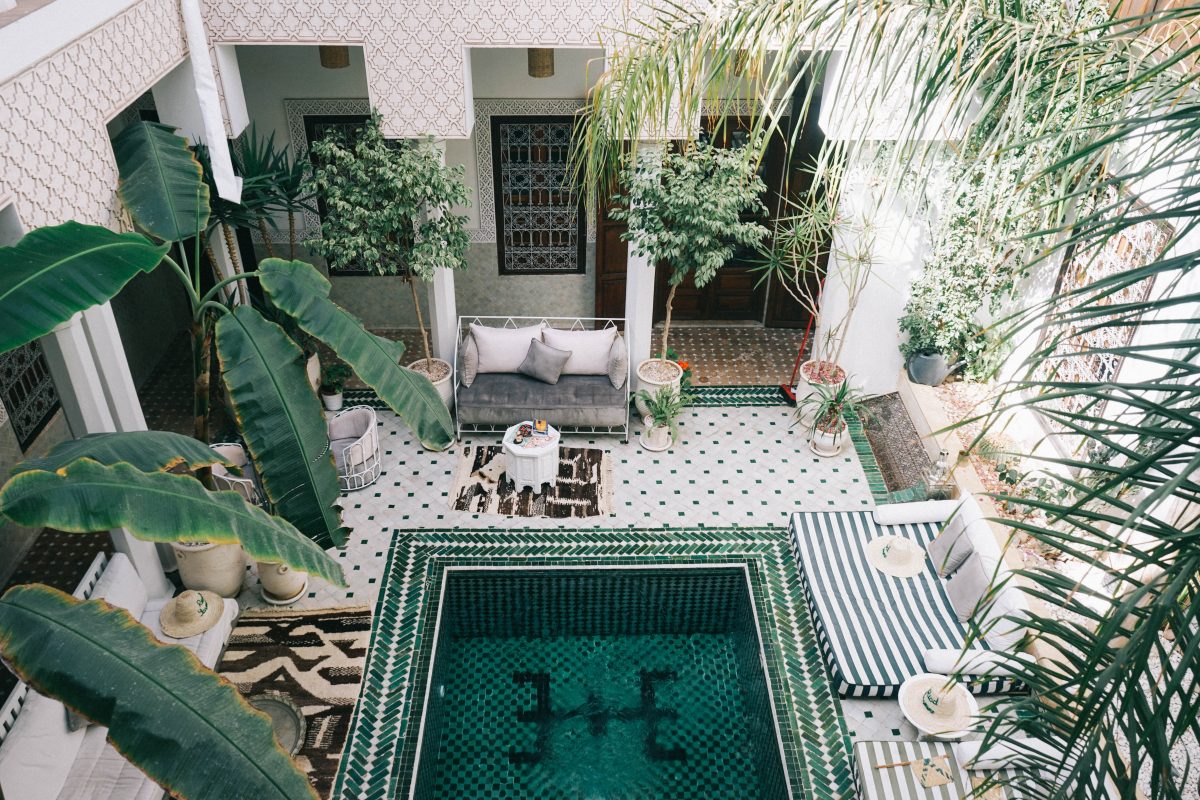 Staying in a stunning riad in Marrakech.

When I think to my time in Marrakech, my stay at Riad Yasmine is one of the first memories that comes to mind. It was the first place checked into and a taste for what staying at a traditional riad was like. With rooms facing an inner-courtyard that hosted bright tiles around a pool, a rooftop that provided a bird’s eye view into the city, and welcoming hosts, it’s a place that continues to inspire me. Since then, traditional Moroccan furniture and design details like Moorish patterns have been engrained in me — let’s just say there’s no surprise what my future house will be decorated with. 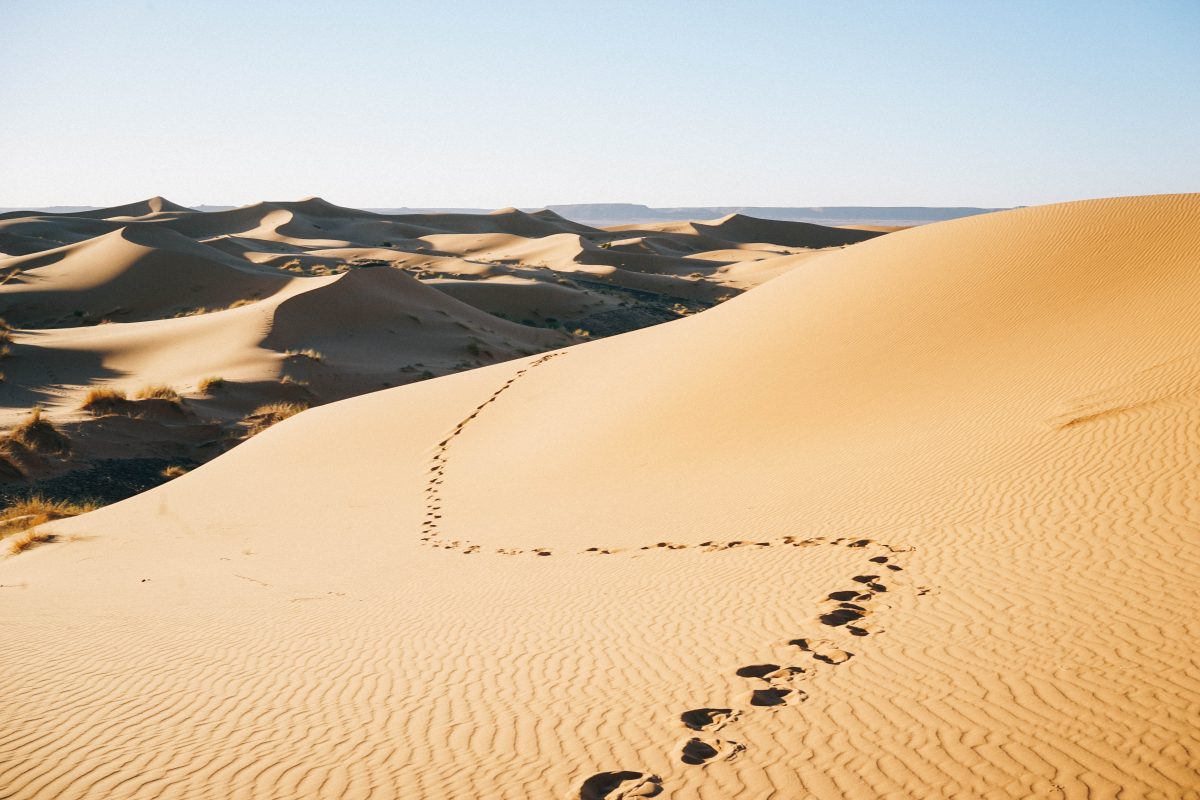 Catching sunrise over the Sahara Desert.

They say it’s the journey, but in some places, it’s certainly the destination. Making the effort to go watch the sunrise come up over the caramel-colored sand dunes of the Sahara was an adventure of a lifetime. Staying in a luxury glamping camp, we woke up early in the morning and layered up as it was rather cold out. As our guide took us up and over the dunes, we found our spot. We watched the sun inch up, until the moment it reached our faces. The sand seemed to sparkle and the dunes stretched further than I could have ever imagined. 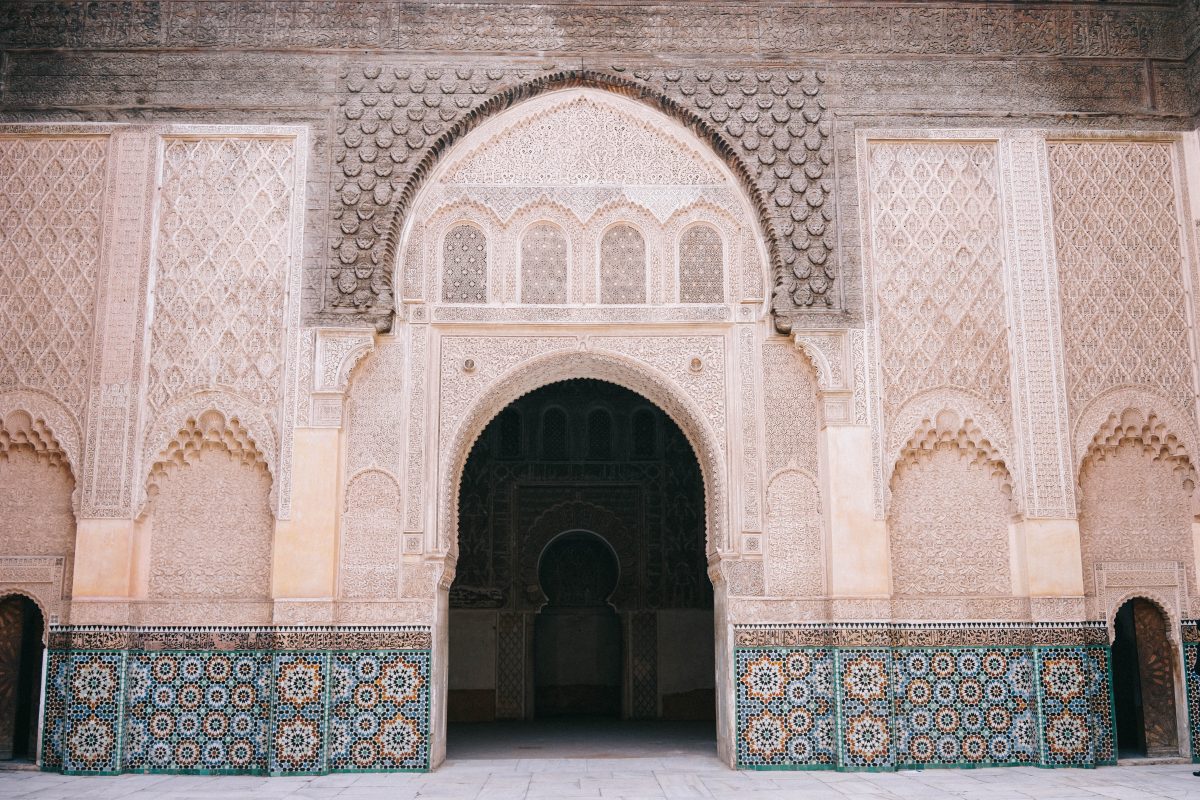 If there’s one space to place on the bucket list in Marrakech, it’s the Ben Youssef Mosque. As an early riser, it finally paid off. Scurrying through the medina from the riad, I found the entrance. To my surprise, there was only one other person inside. Paying the ticket, I passed through the shadows of the over-hanging arched entrance and it opened up to one of the most beautiful spaces I’ve ever seen. Tiled walls glistened and you could feel every ounce of energy that went into making the intricate designs of the carved walls. When I think about Morocco, I still talk about this inspiring place in Marrakech’s medina. 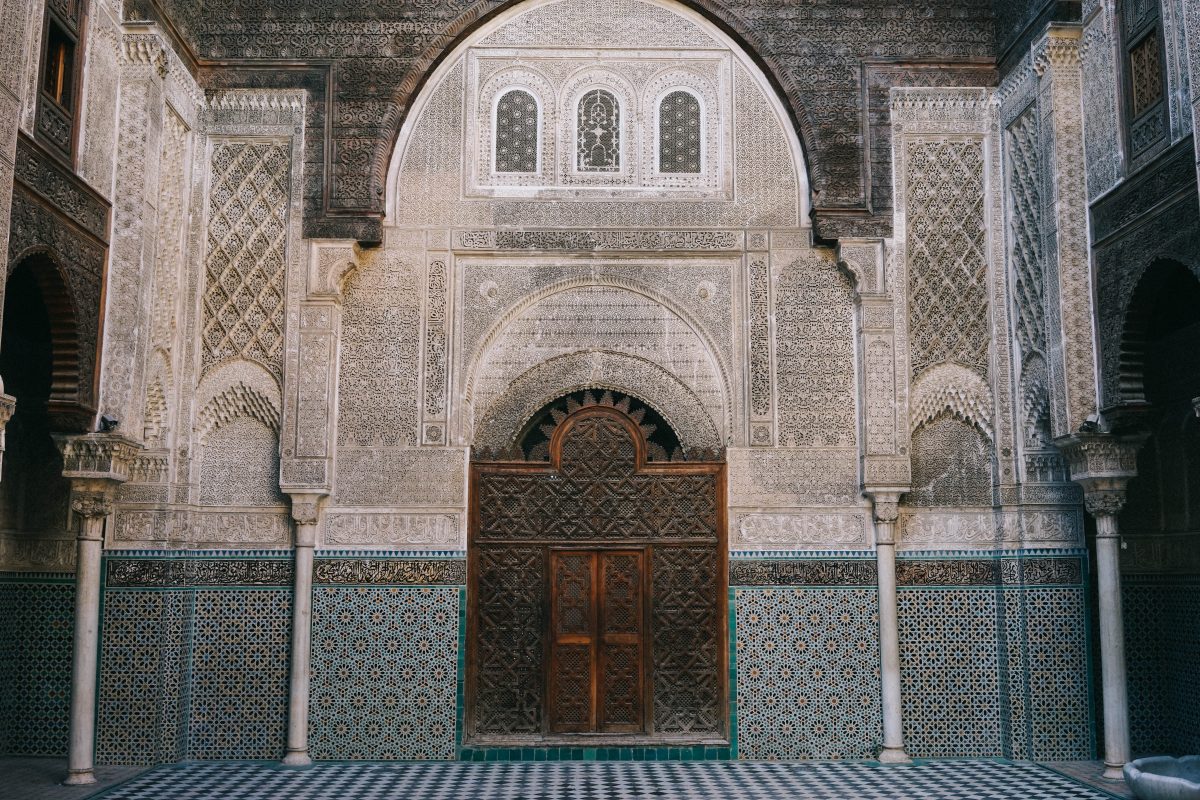 To this day, I wish I had more time in Fes. Leaving only 24 hours to explore this unbelievable city in the northern part of Morocco, it meant we had one chance to see the city. To our surprise, the riad we had booked couldn’t have been better timed. Arriving a bit tired, the greeting with a traditional hot mint tea made us feel instantly felt welcomed and rejuvenated. Though just outside our riad’s walls, there was a world to be discovered — tanneries, shops, date stands, and the Al Attarine Madrasa. The contrast of rest of inside a peaceful riad and the buzzing energy of the city paired together in the best adventure to end the time in Morocco. 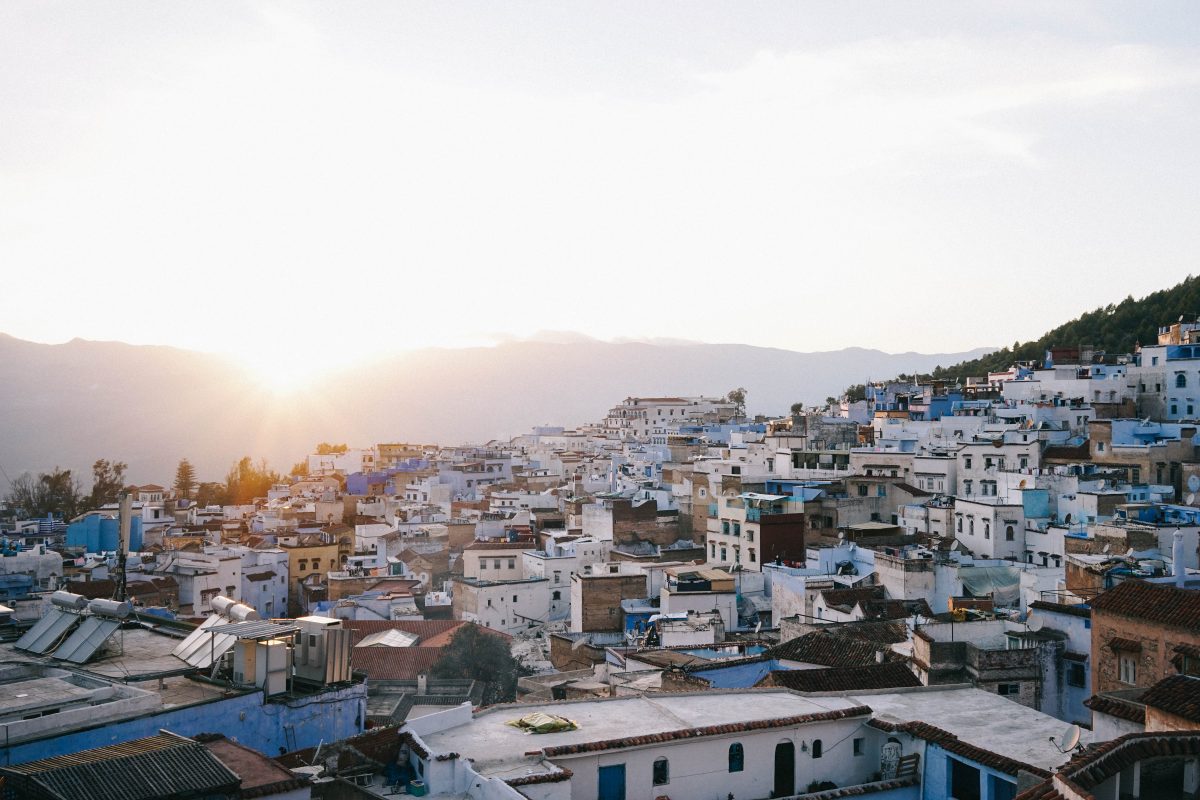 Sunset and the Call to Prayer over Chefchaouen.

Chefchaouen had been on the top of my list, originally for it’s famed blue-drenched streets. Little did I know that I would be finding something else in this city that for me, pinned down why I loved traveling to Morocco. It was late in the afternoon, sitting at Le Lamp Magique at Aladin’s in Chefchaouen. A few snacks and drinks had arrived and the sun started to set. At that very moment, the Call to Prayer rang out over this mountain town. It was so peaceful, reverberating off the walls and time felt like it stopped. An indescribable feeling happened in that moment, and for me, a reminder of why it’s so important to discover a new culture through travel. 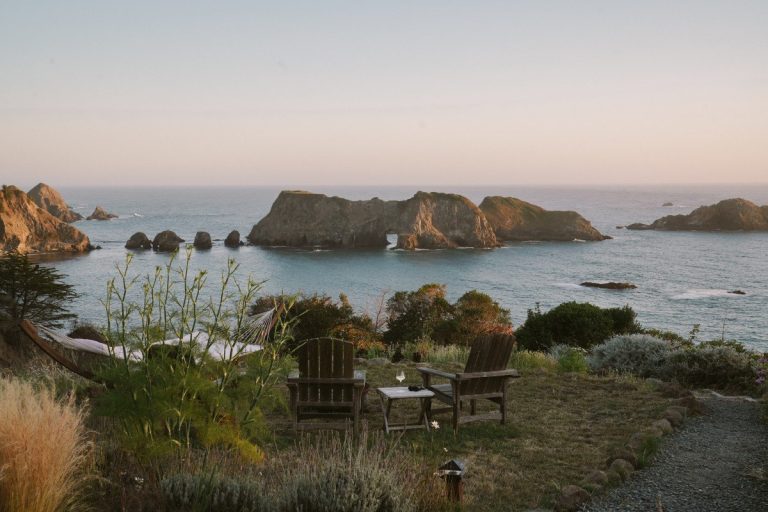 The Best Romantic Getaways in California 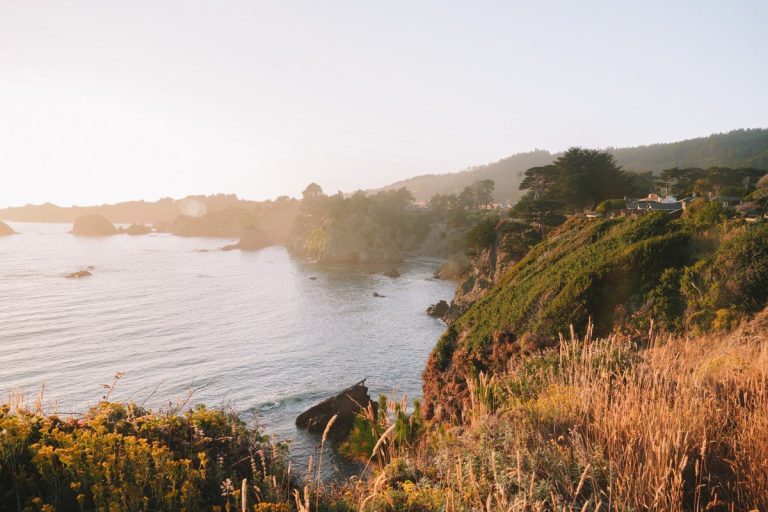 How to Support a Local Community When Traveling 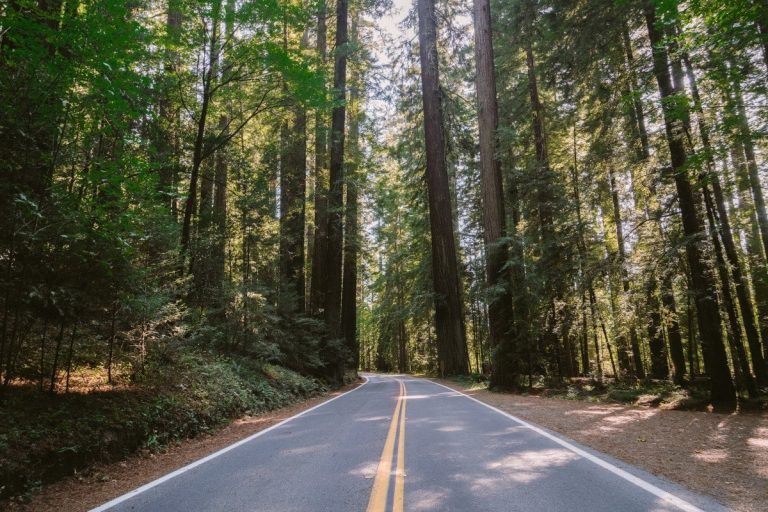 How to Travel Responsibly and Safely in California This Summer 2020