The first morning I woke up in Vietnam is something that is forever imprinted in my memory.

Before I stepped into the shower with the flip flops I brought dedicated to “dirty showers”, I took a look at the sprawling city that was Hanoi. Chickens squawking in the distance, the street lights were flickering off, and the chimneys started to fill with smoke from the morning meals beginning to take shape. It was only 6:30 in the morning, and the empty pit that was my stomach was craving for something to fill it. 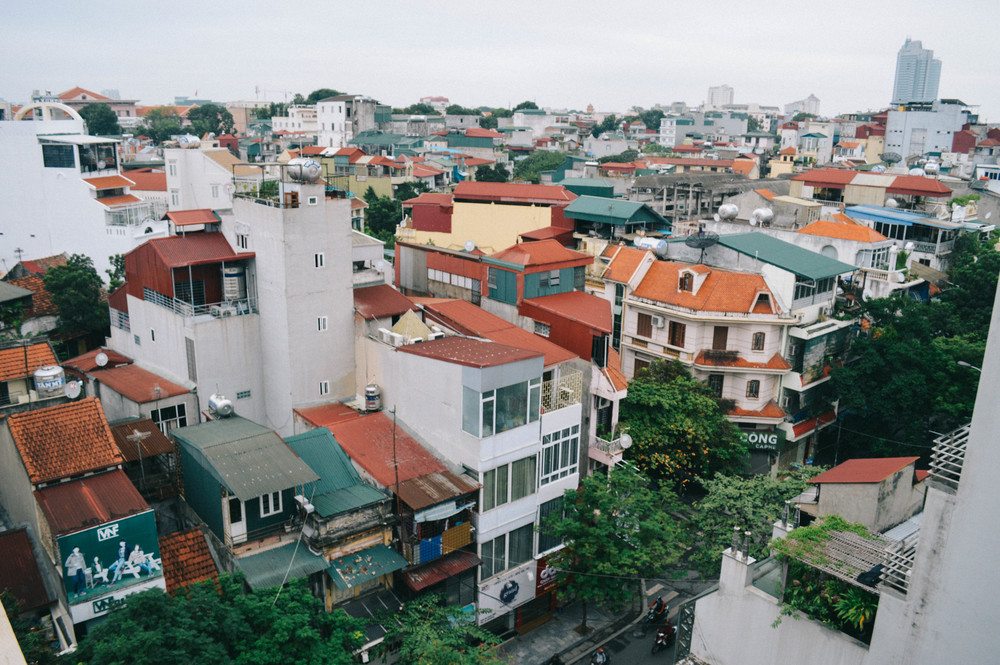 I knew Hanoi was a place dedicated to the art of noodles, heck even Obama and Anthony Bourdain ate their famous $6 bowl of noodles in the very same city a couple months ago. As I walked downstairs by the unappealing breakfast buffet, my brain tried to rationalize with me: break a buck and try my luck on a questionable hotel breakfast or head to the streets?

Obvious answer: go with the tastier option. So I stepped into the buzzing morning traffic.

I remembered just a few hours prior when I landed how humid the air was — the kind of thickness that permeates each and every breath. This morning there was an elusive breeze. It hit me the minute as I stepped out into the street — only to find it was from the ongoing traffic that buzzed by my face. 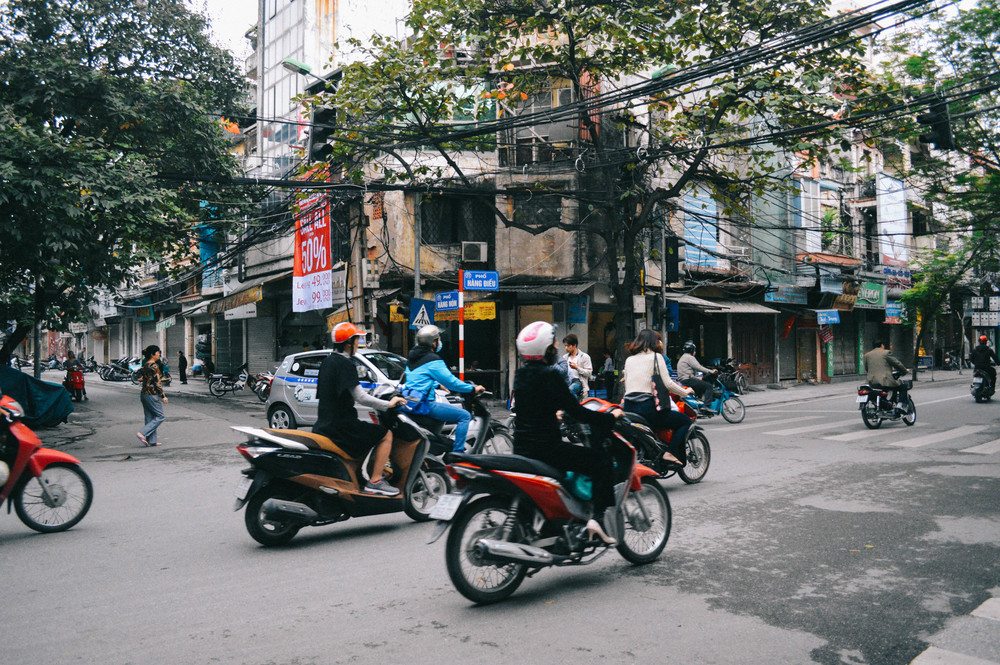 Food in Hanoi is mostly notable for small tables, short chairs, and a vendor slapping down some questionable looking meat into boiling pot of water. Almost every street is drenched with overhanging electrical wires and adorned with at least 4-5 food carts to choose from. It felt wrong to choose the first one I saw, though I knew it was a sustainable back up should I not find another street cart.

I was on the hunt for pho.

A tip from a local guide mentioned one of the only times to find the good pho was in the morning as it’s a traditional Vietnamese breakfast, so at last the hunt was on.

As I circled through the streets, the array of options on offer came one after the next. My criteria for choosing where I’d eat boiled (no pun intended) down to three things: (1) Boiling water, literally, (2) Packed with locals, and (3) the traditional Hanoi clear broth (Hanoi is known as one of the birthplaces of pho, traditional in its clear broth and minimalism). 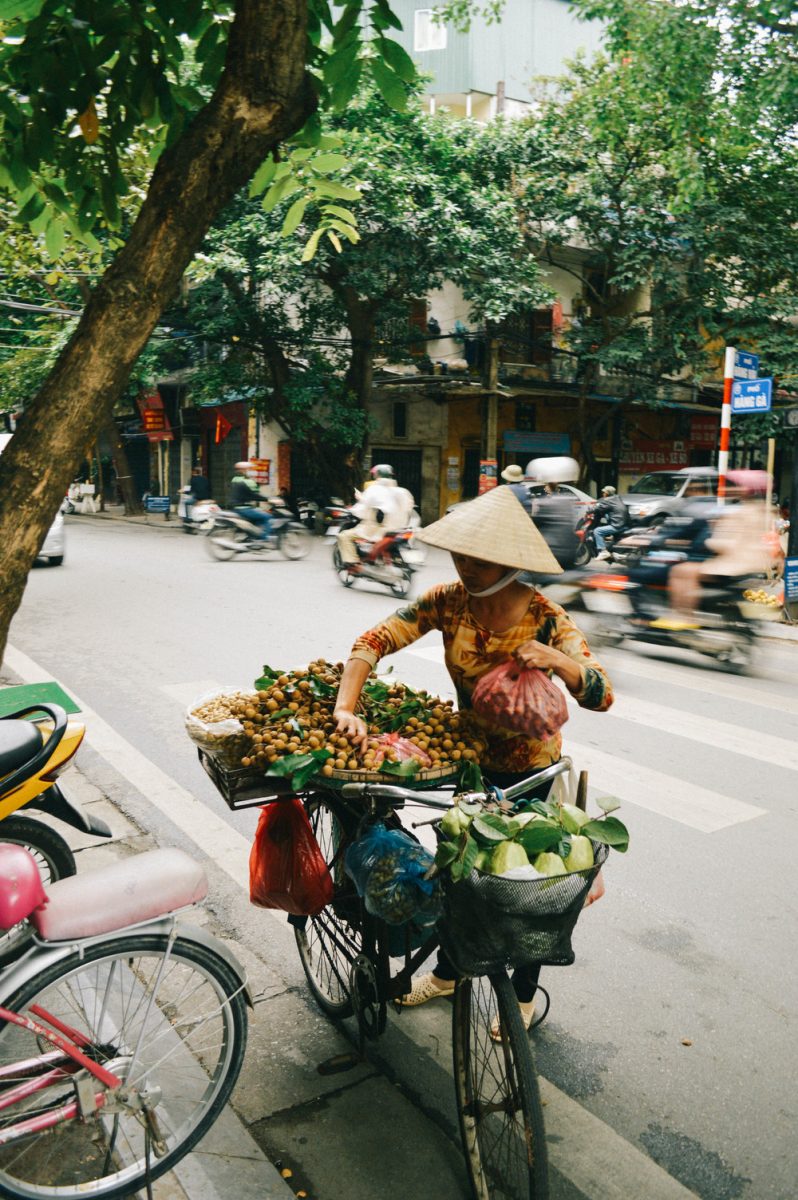 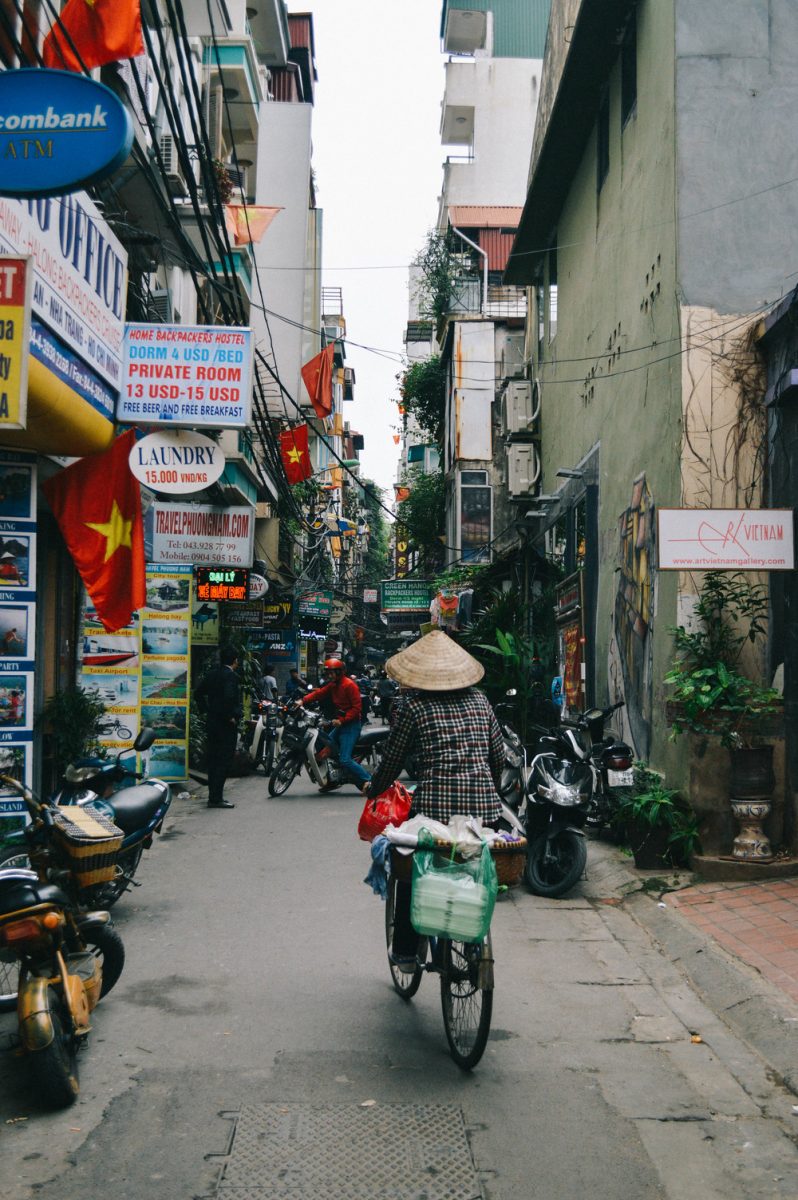 I got more than what I bargained for that morning, and in particular the smells. I traversed across the street known for the meat markets. I lost my appetite immediately, yet I moved on. Thirty minutes had past and still hadn’t found the “one.” I remembered the first one by the hotel in the heart of the Old Quarter. Doubling back down the street of the meat markets, I held my breath and took a straight shot for the corner spot with a bright yellow sign.

I sat down at 7:30 am and within minutes, a bowl of piping hot, clear broth soup was placed down in front of me. Filled to the brim, the broth splashed over the edges onto the plastic tables. I was sitting next to a group of schoolgirls who were giggling over something on their phones. An array of sauces and “toppings” were on the table like greens, sprouts, peppers, and spices. I watched the girls get their soups, dress it with toppings and followed suit. 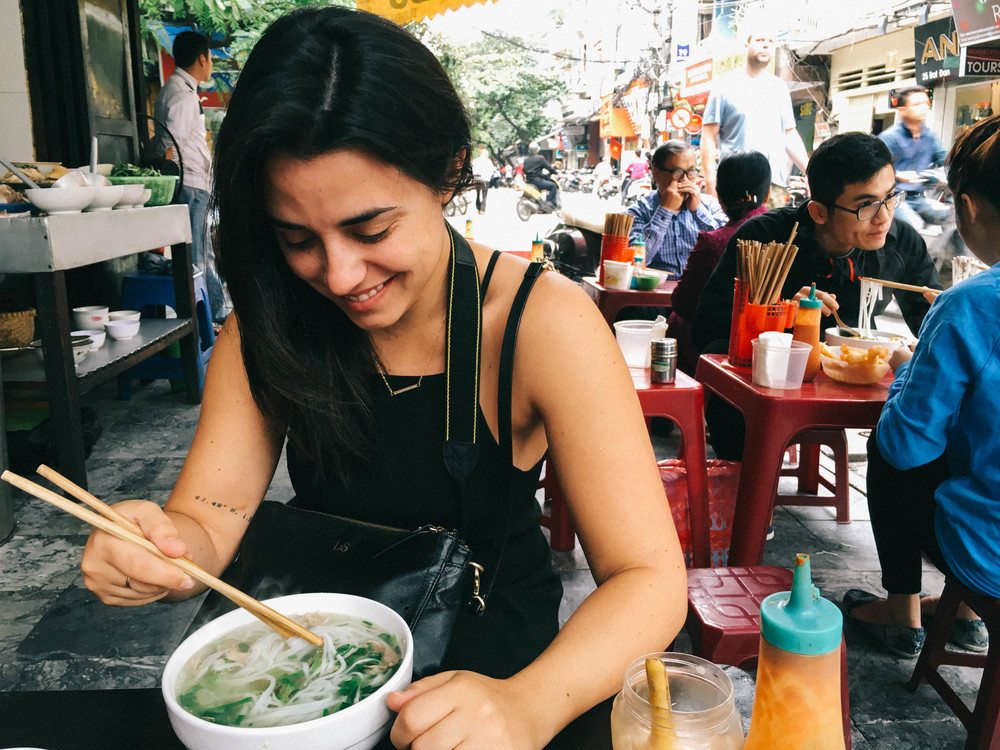 It was everything I thought it would be. I came all the way to Hanoi, and I couldn’t have been more satisfied, and left craving more. The hot broth was the perfect home to the glassy noodles, slices of pork, and greens that made their way into a bath of flavors. Each bite was better than the next.

Where to eat Pho in Hanoi Old Quarter:

How to order Pho in Vietnam:

+ Take a seat at the low seats, let them know which protein (most stalls only do one, so be aware of that) and a size (either small or large). 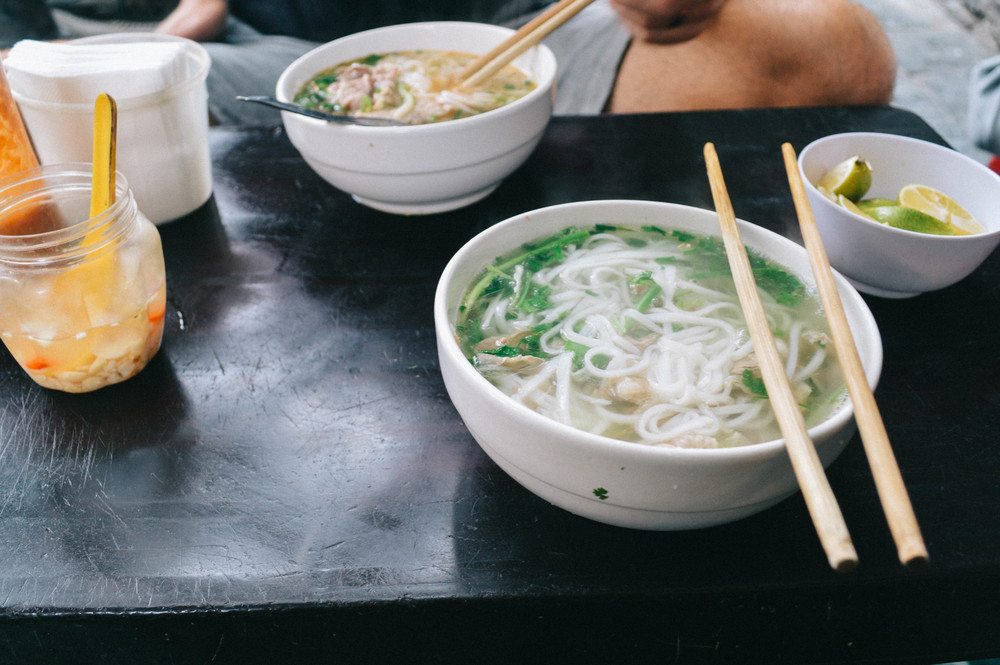 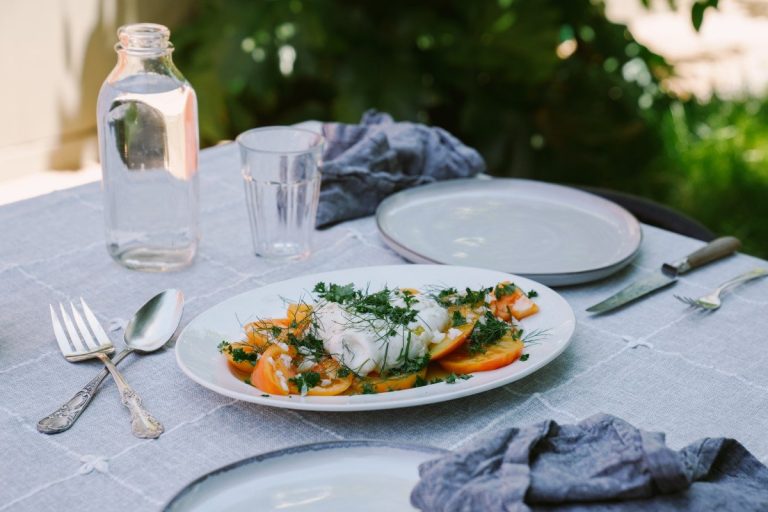 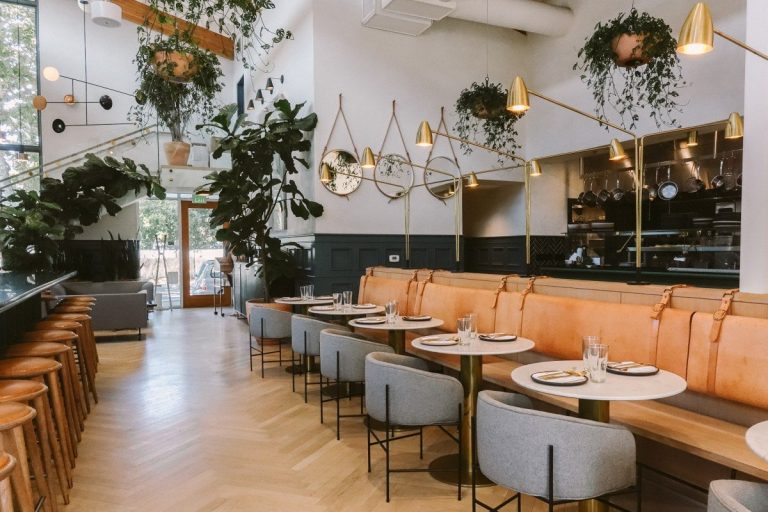 The Best 20 Restaurants in Sacramento, California 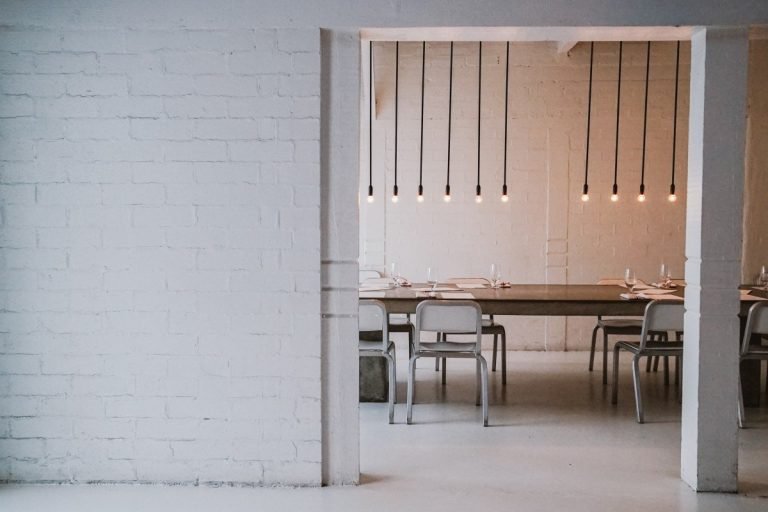 The 20 Best Restaurants in Palm Springs